It all adds up

To a safer community for all of us.

The Muskegon Area Medication Disposal Program (MAMDP) is a collaborative of several community organizations that have come together so that residents of Muskegon County and surrounding communities would have a place to safely dispose of unused and expired medications and sharps.

Proper disposal of medication helps promote a healthy community. By removing unused medication from your home, you can reduce your likelihood for burglary along with reducing the chance for meds to be misused. There are environmental benefits too! By not flushing or throwing away your medication, you save the environment and water supply from contamination.

We are celebrating our 11th year with collection totals of over 21 tons of medications that have been safely destroyed since 2010. The program is making an impact and a change in behavior for our area residents on how they dispose of their medications and sharps. We have grown to be one of the largest take back events for the State of Michigan according to past Michigan DEA reports.

What are we doing to help people properly dispose of unwanted medications?

We collected over 3,814 lbs of unused and expired medications and over 3,120 lbs of sharps that have been safely disposed! 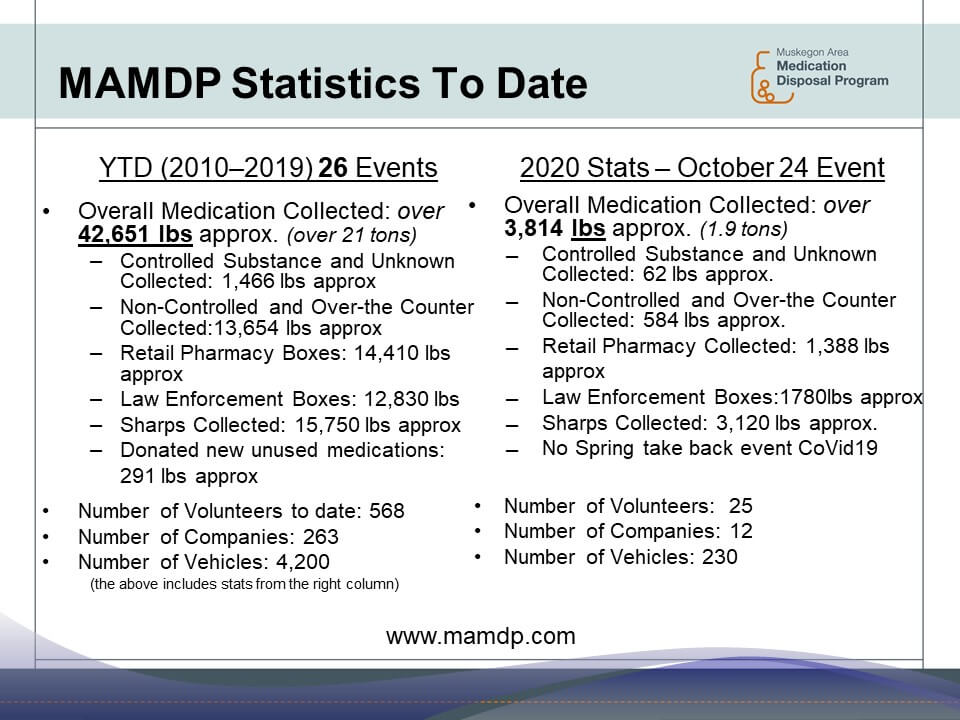 The Muskegon Area Medication Disposal Program (MAMDP) held its Fall event on Saturday, October 24th in Norton Shores with over 230 participants who dropped off more than 3,814 pounds of medication overall (1.9 tons). Approximately 62 pounds of both controlled substance and unknown medications were turned in as well as 3,120 pounds of sharps turned in. In addition to the one-day take back numbers, the team collected about 1,388 pounds from community and retail pharmacies and over 1,780 pounds were collected from permanent law enforcement collection boxes.

Residents may dispose of their unwanted or expired controlled medications into secure drop-boxes at the following law enforcement agencies during normal business hours.

Procurement and promotion of the new secure drop boxes has been made possible through the generous support of the Environmental Endowment Fund of the Community Foundation for Muskegon County.

“We continue to provide the one-day take back events in conjunction with the national DEA events to capitalize on the public awareness of properly disposing unwanted medications,” said Sheriff, Michael Poulin, Chair of the MAMDP initiative. “After each of the one-day events, our team evaluates if they are still necessary, and this last one certainly proved we should keep going.” The MAMDP initiative was started in 2010. Since then, they’ve hosted several events per year and established permanent collection boxes at all Muskegon area law enforcement departments and several local pharmacies. To date, the group has collected nearly 19 tons of materials. The Muskegon initiative has received national attention in the 2015 National Drug Control Strategy and listed as a best practice by the White House for Community Benefit projects.

What should I leave at home?

*Sharps will also now be accepted in a proper sharps container at the Benson’s Drug Sav-Mor #17 and the Hackley Professional Pharmacies ONLY.

Bring your unused medications to this disposal event in Muskegon

Bring your unused medications to this disposal event in Muskegon

Michigan Antibiotic Resistance Reduction Coalition
Antibiotic resistance may be the most important infectious disease threat of our time.

SafeNeedleDisposal.org
What to Do with Used Sharps in Michigan

A very special thank you to our sponsors. We would not be here for our community without your support!

A huge thank you to all of our volunteers who took their time to greet, run, sort, count, record, and safely box the medications and sharps. We could not hold these events without your participation.

Chief Gale received his Bachelor of Arts degree in Criminal Justice (1990) and Masters of Public Administration degree (2006) from Grand Valley State University, Allendale, MI. He was inducted into Pi Alpha Alpha, the National Honor Society for Public Affairs and Administration. He is a graduate of the Northwestern University Traffic Institute School of Police Staff and Command, the Northwestern University Executive Management Program, International Chiefs of Police-Leadership in Police Organizations, and the Federal Bureau of Investigations Police Executive Development program.

He also serves on the Muskegon (MI) Central Operations for Police Services Board as the Treasurer (aka County Chiefs Association), the W.E.M.E.T. (West Michigan Enforcement Team) operating committee, Vice President of the Western Michigan Chiefs of Police and Treasurer/Secretary of the Michigan Chiefs of Police. Chief Gale has been awarded several local and state awards for his dedication towards safety including; Michigan Association of Chiefs of Police Traffic Safety award, Governor’s Traffic Safety award, Health Projects Community Impact award, Muskegon Alcohol Liability Above and Beyond award, and the Chamber of Commerce GEE award.

Chief Gale stays active with youth as a hunter’s safety instructor and helps organize the Sportsmen for Youth program, which annually serves 2500 youth. School safety has always been a passion for Chief Gale as he strives for better security measures in Muskegon County schools. He was a team member who assisted with implementing a countywide lock down policy and has led a team of police, fire and school superintendents assigned to create a countywide school emergency management plan.

He has served as a chair for several Mercy Health Project coalitions including the Alcohol Liability Initiative, Muskegon Area Medical Disposal Program, and is currently the chair of the Ride with Pride program. He was the founder of the award-winning FACE THE BOOK and RIDE with PRIDE programs and actively seeks new ways to prevent the youth from making bad life changing decisions.

Thank you for all of our community support!

A very special thank you to our sponsors.
We would not be here for our community without your support!

A huge thank you to all of our volunteers who took their time to greet, run, sort, count, record, and safely box the medications and sharps. We could not hold these events with out your participation.